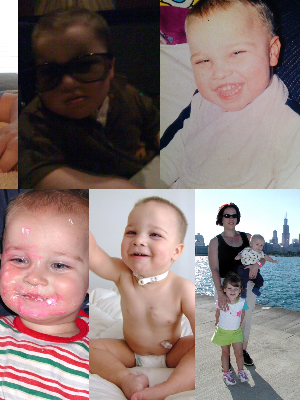 On October 9th, we will be representing Ronald McDonald House Charities (RMHC) at the 2022 Bank of America Chicago Marathon!  As a members of Team RMHC, we will be training, fundraising and ultimately running 26.2 miles to help keep families together.  Here is the story of our Team Captain, Lynda and her beautiful family...
Liam was born on May 24, 2005 at the time, his sister Sam was 3 years old. Liam was a great baby, with bright, blue eyes and and the most beautiful smile anyone has ever seen! Liam's first year of life was very typical, although he had suffered many more ear infections than his sister. By 6 months old, he would recover from an ear infection and then literally be diagnosed again shortly after. He had tubes put in his ears and adnoids removed and that seemed to do the trick...temporarily. By the time Liam was 15 months old he continued to be sick and one instance Lynda took him to the doctor and had told them he seemed lethargic and she requested they take is O2 saturation. It ends up, his sats were in the high 80s and he was immediately admitted to Central DuPage hospital. Again, he was diagnosed with just another illness, received breathing treatments and was recovering pretty well. Liam had been in the hospital for a couple of days and he was due to be released so, his dad returned to work. Liam just had 2 tests left before he was to go home, a swallow test and a CT Scan. The swallow test did not go well. He was very upset and he ended up failing the test. He then went to the CT Scan. Oh, he didn't want this done and he was miserable. Lynda was so upset she asked her parents to come to the hospital to be with them. They did so, and she is so thankful, because shortly after they arrived the doctor came in to tell them all that they found a tumor in Liam's brainstem. Words can't describe the absolute devastation and helplessness of the situation. CDH asked what hospital they wanted to transfer to... Northwestern or University of Chicago. They had no idea and were still stunned by the news. Luckily Lynda's sister in law is a doctor in CO and they were able to call her for advise. She let them know that they were very fortunate to live in Chicago and that we couldn't go wrong with either hospital. They chose University of Chicago. Liam's dad left work and ended up riding with Liam in the ambulance to Chicago. Lynda's brother, Mitch, brought her home so she could shower and pack. Little did she know, she would not return to their house for 3 months. Lynda packed our bags and she'll never forget sitting in the bathtub for what seemed like forever, crying like she's never cried before while the shower poured on her. Mitch brought me to UofC late that night.

Liam had his challenges over the next year and unfortunately, he lost his battle in October of 2008. Lynda wanted to give back to this wonderful charity but at this time, she couldn't step foot into another RMH. As the healing process began, Lynda started running as a sort of therapy. In 2014, Lynda ran her first Chicago Marathon. At that time, she ran with a charity that sent kids with cancer to summer camp. When running that race, Lynda saw that RMHC had a charity team. The next year, Lynda ran the marathon solo for RMHC. In 2016, she was encouraged by one of my running buddies to create a team for Liam. THIS was her way to give back and to keep Liam's story alive! Lynda created Liam's Ladies (at that time, we only had females on our team). The team has since grown and in 2019, there were over 35 people running for Liam. As we know, 2020 was cancelled and Lynda didn't run the 2021 marathon since she had moved to AZ. Well, she's back in 2022 and so is Liam's Ladies and Gents!
Thank you for keeping Liam's memory alive and raising money for this absolutely incredible charity that has helped so many families like Lynda's!
View More
View More
Donate Now
Team Roster
Raised